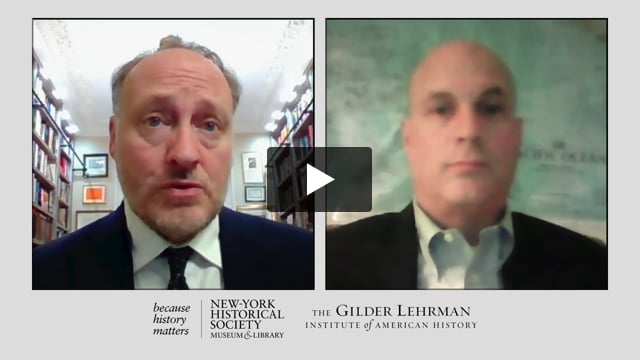 The Gilder Lehrman Prize for Military History at the New-York Historical Society: Fire and Fortitude by John C. McManus

We are pleased to announce John C. McManus, one of the most highly acclaimed historians of World War II and the author of Fire and Fortitude: The U.S. Army in the Pacific War, 1941-1943 (Dutton Caliber), as the winner of the 2019 Gilder Lehrman Prize for Military History at the New-York Historical Society. Jointly administered by the Gilder Lehrman Institute of American History and the New-York Historical Society, this award seeks to engage public discourse in wartime studies, international relations, and diplomacy.

In conversation with historian Andrew Roberts, Chair of the 2019 Judging Committee for the Prize, McManus explores the critical early years of World War II's Pacific Theater, from the attack on Pearl Harbor in 1941 to the Battle of Makin in 1943. Over the span of less than two years, a once unprepared, inward-looking nation transformed into a global superpower while the U.S. Army evolved into a formidable force under the leadership of Generals Douglas MacArthur, Robert Eichelberger, "Vinegar Joe" Stilwell, and Walter Krueger. Click here to read the full press release.

John C. McManus is Curators’ Distinguished Professor of U.S. Military History at the Missouri University of Science and Technology.

Andrew Roberts (moderator) is Roger and Martha Mertz Visiting Fellow at the Hoover Institution at Stanford University and Distinguished Lehrman Fellow at the New-York Historical Society.